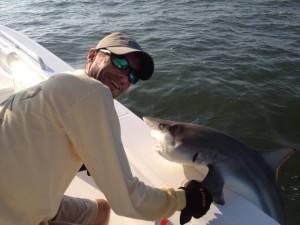 It’s a dream job, no doubt. As a kid I went through phases of wanting to be an astronaut, an archaeologist (the Indiana Jones kind), and so many other things. As I grew into my teens people would ask me what it would take for me to be happy. What was I passionate about? My answer would always be, “I won’t be happy unless people pay me to fish everyday”.

At that time, I thought that being a fishing guide required you to first have some kind of wealth backing you. You would have to be a trust fund baby and not worry about money. Basically, I thought it would always be a dream for me or, at best, a goal for a retirement hobby.

As fate would have it, I lucked into the fishing guide business. My father had retired from the US Navy and had recently suffered an enormous set back in his construction business due to the 2008 recession. I was also in the construction business running the smaller of his two companies and was effected harshly as well. Dad decided that he didn’t want to chase money anymore and would rather pursue his passion… fishing.

At first, I was still in the mindset that you had to be a retiree or at least have a reason to not worry about money. I started helping Dad with his website, marketing, and everything else to get the ball rolling. I had started selling insurance and I had some of the best people in the business mentoring me and helping get my new career going. I was so excited for my father to be able to chase his dream and I envied him all while keeping my nose to the grindstone in the insurance business.

I worked hard at insurance and made some great connections and started gaining traction. Where I screwed up was in creating my own identity in the fishing world. While I was helping my father promote himself, I was accidentally promoting myself. As I wrote reports to chronicle our good times and awesome catches on the water, people began to follow me and regard me as an expert. I was still fully committed to being an insurance agent and at the time I was being recruited by one of the most successful insurance companies in the southeast. The dream that I had planned so many times in my daydreams seemed out of reach to me, still.

Through the fishing reports that I was posting online I managed to meet a fishing guide that I admired. He seemed to have all the right stuff. He would post fishing reports all the time and I couldn’t imagine how he ever got so much business. We ended up having a few conversations and ultimately he asked me to come work on his boat after a falling out with his first mate. I accepted but I still pursued the opportunity with the insurance company.

The recruitment process was long and tedious with the insurance company. They did background checks, multiple interviews, and personality tests. I was selling insurance but at the same time I was working on a boat and baiting hooks for extra money. Then the day came that I had to make a choice… that pivotal moment… the proverbial fork in the road.

The insurance company called me and offered me the opportunity to move to Savannah and take on an agency. I was pumped. My wife and I had already been up there to look at houses. The second call was from the charter captain that I had been helping. He wanted me to run a boat for him as a captain. This was a huge decision. Do I follow my dream and be a fishing guide, or do I do the sensible thing and take the job as an insurance agent.

I did the wreckless thing. I became a fishing guide. I did what only insanely passionate people do. I chose the road less traveled and risked everything. My wife was very supportive and even though we were both scared to death, we went for it. 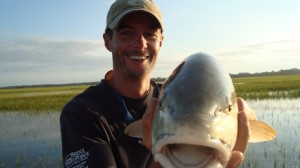 The fairly tale could only last so long though. I ran the boat for a few months and was happy as a lark. No one else in the business had a clue who I was and they treated me accordingly… as a nobody. The cold shoulder couldn’t overcome the absolute joy that I felt every time I stepped on that boat. This was where I belonged and I was determined to prove it.

Meanwhile, my father was still getting himself going in the guide business. I felt that it was best to be loyal to the guide that I was working for to avoid any conflict.  It was working out just fine, but my boss was expressing his concerns about the conflict of interest.

He also started to show a different side. He became increasingly demanding and rude. I was putting my heart and soul into this but I could never tell if he was going to be Dr. Jekyll or Mr. Hyde. Some days I was praised and high fived and others I would be cussed like a dog. After a while, I reached my breaking point and decided it was best to go out on my own.

Now I found myself competing against the guy that brought me in the business, the guy that I looked up to so much, and the guy that I hoped so much that I would be able to help grow to new heights. We were on bad terms. I went to work doing what I do best… marketing. I worked my butt off to get my name out there and to let people know that I was on my own. I fished nearly everyday and was proving that I belonged and was as good as anyone.

I found some success on my own and my old boss and I decided to bury the hatchet. We would work together and help each other. This could never last as the first time we were both booked it caused a second falling out. Maybe we had different ideas about what working together meant, but either way it ended badly again.

At this point I re-doubled my efforts and decided to stay solo at all costs. I also did one of the dumbest things I have ever done in my life. I bought out my old boss. It was a fair deal that included a non-compete that would keep him out of the fishing business for a fair amount of time. I had a ton of money to pay back and I was happy to get to work as the owner of a busy guide business.

That honeymoon didn’t last either. I realized that the business I bought was a house made of straw. It was a pile of smoke and mirrors and at the root was just a poor attempt at a true business. The fault was mine. I should have done more due diligence. I shouldn’t have made an emotional decision.

I moved forward anyway. I tore down the entire business to its bare bones and rebuilt it. It came back better than ever and was rolling hard. My old boss was riding the thin line between complying with and violating his non-compete. He threw up a couple of websites and keyworded them for “fishing guides” and “fishing charters”. Even though he wasn’t offering these services, he was competing for search engine real estate with the very websites I had bought from him. I did my best to let it go.

Fast forward a couple of years to the present time. I have come to the point in my career as a fishing guide that I know who I am. I could have easily built my own business just as quickly without buying someone else out. I have a loyal following of repeat clients (one who is texting me to book a trip as I write this). I have great friends in the business that respect me and have my complete respect. I am content where I am.

I do business in a way that I don’t have to be ashamed or sneaky. I deliver a great service to my customers and I am always willing to 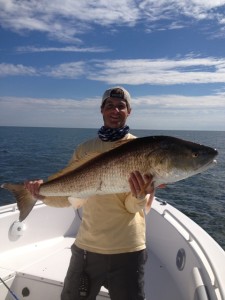 help my fellow guides. That old voice still creeps into my mind from time to time asking for revenge but I will not let that stand in the way of accomplishing my goals.

I am a fishing guide. I never thought I would be. I’m not rich. I’m not retired. If I told my 10 year old self everything about what I went through to get here and asked him if he would do it knowing how much crap he would have to deal with, he would say yes. He would be happy. He would be so stoked that you wouldn’t be able to calm him down.

Cheers from the coast,