If you could rate fish with a bad attitude, Jack’s would be on top of your brutality list. These copper and yellow giants roam the sounds and rivers all summer long just looking for something to kill, because they can.

I started to notice the bigger Jacks showing during Tarpon fishing trips this Month. These fish are so brutal, they are often mistaken for tarpon on their initial run and these fish will dump a reel that doesn’t have a pile of line on it with a tight drag. 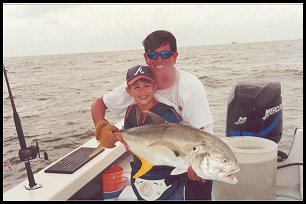 The most exciting method used to target these larger Jack Crevalle, is sight casting with a top water plug. If it floats in front of them, they will eat it simply because it’s in their way, just like a Barracuda slaps at a tube lure. With an attitude!

The best tips on finding Jacks depend on several different conditions. The first and most important part of the equation is tide. The middle of the flood all the way up to slack high water is your prime time to sight these fish. The further the tide floods, the further into the sounds the Jack Crevalle will travel with the bait. The bait can be glass minnows, menhaden, or even mullet. They will kill anything that gets in their path.

The second condition is wind speed, but not necessarily wind direction. Basically, the calmer the water, the better the fishing will be. I have noticed on rougher days the schools will go unnoticed but I would still be catching Jacks on the bottom. Slick calm conditions will always be optimal for sighting Jacks from July – September.

The third factor in finding Jack Crevalle is to know what you’re looking for. Jacks will normally be in schools of 20 – 50 fish running through random bait schools of various types through the sounds and shipping channels. Look for the tails of the fish zig zagging through the water very slowly. If the Jacks are feeding on a bait school, they are much easier to spot as the gulls will be all over the top of the school snatching what they leave behind. When you see birds flying erratic and diving and it looks like someone tossing cinder blocks into the water below them, you have found your target. Normally, you will not find any similarities from one school to the next as far as swimming direction.

The key factor in catching Jack Crevalle is boat position in relation to the school. Position your boat with the bow facing the school to make your cast. You will have to get really close to spook a jack when he is on the prowl. Stay about 20 yards off to give yourself plenty of time for casting errors. Land your lure of choice far past the school and quickly retrieve it back to the fish leading the rest. I like to get it close then begin to pop the lure and create a bit of surface commotion to get their attention. About ninety percent of the time two or three fish will strike at the lure and miss, but normally some of the trailing fish will take it.

If you make a bad cast, be prepared to move quickly as the jack fish will speed up as the boat approaches. If the jacks happen to spook, stay still and don’t start your engine. They will surface again 50 or 60 yards from the boat and at that time you can move back on the Jacks

If at all possible, use a medium weight-spinning outfit capable of holding 250 yards of 15 or 20 class line. Spinning outfits will normally outcast anything else when it comes to distance casting for Jack Crevalle. For your leader, graduate from your main line (no swivels) up to 30 and then 50 pound. Tie a loop knot on your lure instead of a clinch knot to give your lure a more natural presentation. The Lure doesn’t really matter much as long as it floats.

You will know when you hook up with a Jack Crevalle. He will do his best to stay with the school, and when he realizes he is restricted, be prepared for the most brutal battle you have ever encountered on rod and reel with a 20 – 30 pound fish!

When and if you land a jack fish, wear gloves of some sort to pick up the fish as they are slimy. You can bring the fish in the boat by holding him firmly above the tail or with a large landing net. They are normally gentle and tired by the time you land them, so the angler is in no danger of having a ballistic fish on board. When removing your lure, lay the fish flat in the bottom of your boat and press firmly on the forward part of the body so he doesn’t shake a treble hook into your hand or face.

Jacks are not much good on the dinner table, so catch and release is very important. Releasing Jack Crevalle properly is easily done as these fish are pretty darn hearty. Use your gloves to hold the dorsal fin or the belly of the fish just beneath the water to submerge the gills. Drop your boat in gear to create a decent flow through the gills and he will dive right out of your hands.