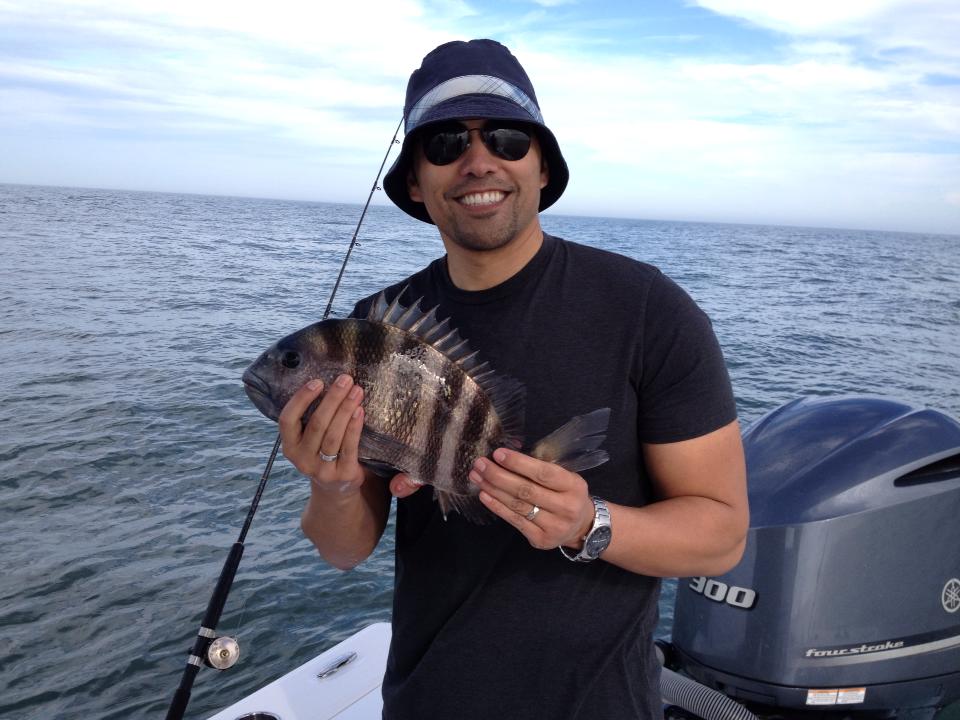 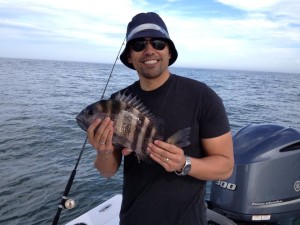 A couple days ago I took one of my regular customers and his business associates out for some Sea Bass and Sheepshead fishing out of St. Simons Island. Every time he comes it seems that the wind blows fiercely and we have to go hide in a creek somewhere. His luck is crazy though, and we always seem to catch fish in spite of the odds being stacked against us.

This time I woke up to calm winds, fog, and flat seas. Hmmm….. this isn’t right. Zac was flying in around noon and as I started to get the boat ready the wind started to blow. My plan was to head offshore and fish the reefs but it was looking like we might have to re-group and fish inshore. I didn’t really want to do that as we had some 10 foot tide swings around the new moon. The water was very dirty and I didn’t like our chances in the river.

Zac sent me a text and said that his flight was delayed. Great. I kept checking the weather buoy and the seas were steadily building. Several times I almost swapped gear to go Trout fishing instead. I ended up deciding to take the beating and head offshore no matter what.

When the crew arrived the wind was still pretty stiff and I told them we were going to have to take some punishment if we were going to fish the reef. They were game. Of course, Zac is always game.

The ride out was a little bumpy but not as bad as I thought it was going to be. The bad thing is that when the current is running fast inshore, it is also running very fast offshore. We got to the first wreck and as I looked at the bottom machine it might as well have been flashing “BAD NEWS!”. There wasn’t much showing on the bottom to give me any confidence. We made a few drops that yielded some Sea Bass and moved on.

Stop two was a more pronounced wreck. The fish were balled up on the lee side and positioning was very tough. Luckily there were Sheepshead there but the current was pushing us all over the place and it was difficult to stay on top of them.

We moved on to a Sea Bass spot that was easier to fish. We caught a bunch of fish and lost a lot of tackle. We fished right up until the sun started setting and towards the end the current began to slow down and fish were coming in the boat from every direction.

It wasn’t the best day ever, but we did catch a bunch of fish. I am also encouraged that the Sheepshead fishing will be spectacular as the Sea Bass weren’t as thick as they have been the last couple of years. The tides are returning to normal now and over the next few weeks we should be able to do some serious damage.