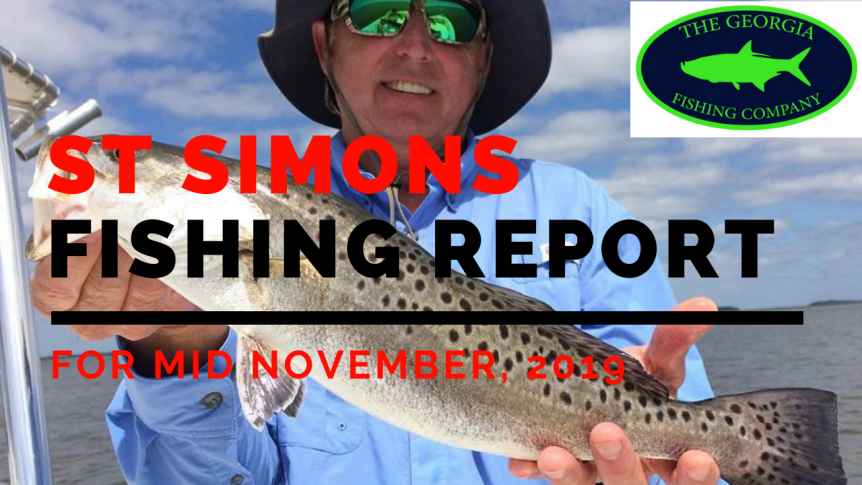 Thanks for checking out our fishing report. We’ve been working hard on revamping our website, and we still have a lot of work to do. But, we didn’t want to put off delivering tips and reports any longer. We’ll be adding a lot of new content and going back through some old favorites, but for now, here is your mid November fishing report.

In this video Capt. TJ talks about current and future fishing conditions but make sure you watch until the end to catch a cold weather Trout fishing tip.

Transcription of video below:

Hey, Captain TJ here with ‘The Georgia Fishing Company’, and this is your mid-November fishing report. Right now, it’s November 14th, and what we’re looking at is a lot of wind over the next few days. That’s always the story this time of years, you have to worry about these north and northeast cold fronts coming in, and bringing a lot of wind with it. Also, the air temperature has been a lot cooler. We’ve had some more down in the 30s. That’s going to drop our water temperatures. So, things are changing.

We’ll start with the Bull reds, because I think we’re just about done with those. This past weekend, we had a really good weekend for Bull reds. Numbers up in the 40s for half-day trips. But that’s tapered down throughout the week. I think, on Wednesday we only caught nine, and I think that was top boat for Wednesday, that just wasn’t all that great. After the cold front that were experiencing now. I think, that’s pretty much gonna put a lid on our Bull reds fishing for 2019.

So, I would expect to maybe catch a few strays out there, but I’ll probably wouldn’t target Bull reds after today, Because the chances of consistently catching them aren’t that good. But not only that, there’s just something better to do. The Trout Fishing is really good right now. What we’re seeing now is everybody’s catching Trout, it’s fairly easy, you find a spot that looks like it should have Trout on it, and there’s probably going to be Trout there. What you’re going to notice is over the next few weeks, the water temperatures are going to get a little colder, and the fish are going to go from widespread to a little bit more condensed, to where you’re finding them really balled up in very specific spots on very specific targets.

What you’re going to be looking for as this happens is deep bends in the back of the river, deep bends in back of these smaller creeps. So, if you can find a bend that say 15,20 feet in the middle, and it’s got this nice sheer steep Bluff on the outside of that bend, that’s good stuff. If it’s got docks on it, that’s good stuff. Overhanging trees, Palmetto Bluffs, these come things. If you notice also, you see these deep bends that have that real soft cloth moat on the outside. But then all of a sudden you see the mud kind of change, the marsh grass changes, it’s shorter, it’s stubbier.

The mud has that shear face on it that really steep face. Sometimes, that’s all it takes as well. So, that’s where you’re going to find these fish, also you get in the back of these really small creeks. Where it’s a foot or two feet deep, and then it drops down to six or eight feet deep in the back, that’s also good. Those smaller creeks you’re also going to find your Red fish, and Black drum as well mixed in with the Trout as well as sheepshead.

So, going forward, that’s what you’re gonna be looking for those trout. As you start to notice that you can’t find them everywhere, that’s where you’re gonna find them. Also, right now, we’ve got seven and a half foot tides with mid-morning high tides, which is good. Because the tide turns, and you got that seven and a half foot tide. So, you’ve got plenty of current to fish for the rest of the day. Where you run into trouble is when you have say a six and a half foot tide or six three, and then it’s say a point five low tide. So, you’ve gotten less than six feet of water moving.

You’re not gonna have a lot of current throughout the day, and in some spots, you’ll hardly see the cork drift. Those are the days that are just going to get tough. The water clarity is excellent, water

temperature is excellent, you know the fish are there but you can’t get any bites. So, what you’re going to have to do is lighten your leader up. You’re gonna have to go that 20-pound test leader, down to like a 6-pound test leader. Go from say, one off-hook down to like a number three or number four. It will small with your tackler, real subtle, that way that Shrimp can swim freely. It’s hard for a Shrimp to move that 12-pound testament. It is hard for Shrimp to drag that hook.

When the current is flushing, not a big deal. But when it’s barely moving, it makes all the difference in the world. Those fish are still sitting down there with their nose in the current, but if that Shrimp just kind of paralyzed, just kind of going along with the current, looking dead. It’s not very convincing, but if he’s still kicking around. They can’t see that leader, they can’t see that hook, the Shrimp looks lively, you’re going to catch fish that you weren’t going to catch with the heavier tackler. So, if everything is right, except the current’s kind of slow, and you’re not catching fish, lighten your tackle up. See if that helps you. That’s it. See you next time.