On Tuesday November 26th, 2014 my wife and I had the pleasure of fishing with Jason of Hunter Banks Fly Fishing Outfitters in Asheville North Carolina. We were on vacation for our 5 year anniversary and about 3 weeks prior to our trip we started the booking process with another guide from the area. After trying to secure a day of fishing with the first guide and some “spotty” communication at best, we still had not gotten any confirmation for our trip. We were really looking forward to doing some fly fishing while on vacation and figured that all hope was lost.

That is until we wandered into Hunter Banks on Montford Avenue in Asheville. We walked in and I was instantly impressed with the size of the shop and the great selection of gear that they had. Being that I am partially sponsored by Simms Fishing gear myself, I was already in hog heaven seeing all of the waders, jackets, hats, and other Simms gear that they had in stock. On one side of the shop they had all of their apparel and outerwear and the other side was full of fly rods, reels, flies, and one of the best inventories of fly tying materials I have ever seen.

I was content to just browse the store and pick up a few poppers and some bead chain eyes to take home to my vise but we figured we would ask one of the employees if there happened to be a guide available for the next morning.

At the counter there was a nice fellow and we asked if by some miracle there was a guide open for a half day wade trip the next morning before we got back on the road to Georgia. We told him about our experience with the guide that flaked out on us and he was apologetic even though it obviously wasn’t his fault. He contacted Jason and as luck would have it Jason was booked in the afternoon but was open in the morning.

They were able to secure our fishing licenses for us and we left expecting a call from Jason to firm up the departure time. A few minutes later while we were having dinner at Chestnut on Biltmore Avenue (I highly recommend that you stop in for their “Appy Hour”) Jason called us and firmed up our meeting time for 7 AM the next morning.

The next morning we met Jason at the shop and he provided us with waders and wading boots. My wife realized that she had left her sun glasses at home and we were able to purchase a set of Suncloud polarized sunglasses for her before we left. I doubt we would have had that convenience if we had fished with our original guide, Capt. No Show.

After a 30 minute ride to the stream with Jason we arrived at our first spot. Katie was nervous that she would just be in the way as she had never fly fished before. I was nervous that I would screw everything up and embarrass myself as a guide. I had never fly fished for anything other than saltwater species before so I was even further  behind the curve than someone with no prior experience. 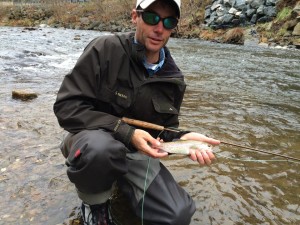 Jason was polite, patient, and provided great conversation. On Katie’s first cast she hooked a Rainbow Trout and after a couple more tries she was able to land one.

I, on the other hand, was a total disaster since my natural tendency is to strip set. Jason spent some time ironing out my technique all while never neglecting Katie. I will say that I was on to his game when he would try to politely tell me I was screwing it up. At one point he pointed out that I was “mending my line a little too well”. I knew that what he really meant was, “come one man we’ve been over this!”. I appreciated the subtle corrections especially since I was trying to save face in front of my wife. But Jason, from one guide to another… I know those tricks! 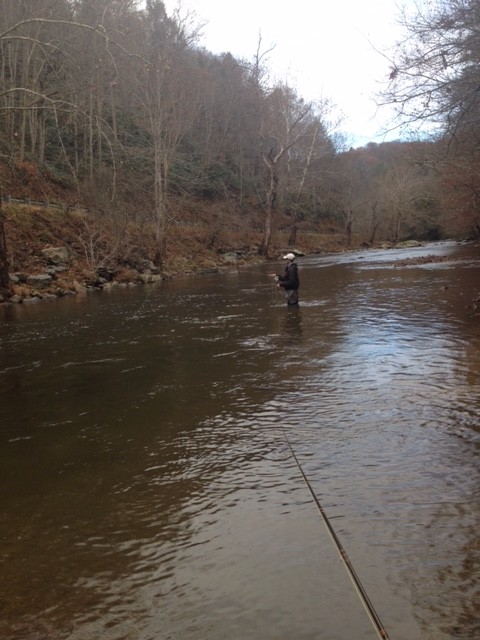 By the end of our trip we had both caught plenty of fish and there is no telling how many we would have had if we actually knew what we were doing.

If you are ever in Asheville or have any desire to fly fish in western North Carolina I can’t recommend Jason and the crew at Hunter Banks highly enough. If you fish with Jason go ahead and get a crisp $100 bill, fold it half twice, and be ready to tip him at the end of the day. He’ll earn it, I promise.