We finally have some clear Skies and calm winds. Now that we’ve been able to get out and fish we have found some pretty awesome fishing.

This past Friday another captain and I were guiding a short kids trip and noticed a huge school of jacks. These giant Jacks haven’t been around for the last couple of years and we were kind of surprised to see them.

Over the last few days we’ve been able to find plenty of them and they are not small. We’ve also been catching some awesome spinner sharks and Blacktip sharks behind the trawling shrimp boats out in front of the island.

The triple tail fishing has been pretty decent as well. It takes a bit more work than it does in April and May but we’ve been able to get some really nice fish.

The Tarpon are here and pretty thick so now is the time to book your tarpon trip. I only have two open days left for the month of July so it is best to book now to catch the best days in August. 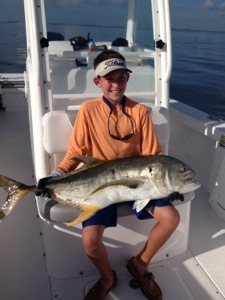