I just picked up my new 243 Everglades and it has to go through the break in period before its first service, so naturally I went fishing. I called my dad up and we decided to run from Hickory Bluff, past Jekyll Island, all the way down the beach of Cumberland to the Fernandina Jetties. It was a great way to put some time on the boat and to see what it was really made of.

It rode like a Cadillac, but when we got to the jetties the water looked awful and the wind was howling. We decided not to even bother fishing there but to fish the intracoastal on our way back home.

We stopped in several places, some that were very familiar and some that just looked fishy. The bite was pretty decent and we caught some very healthy Trout before deciding to go to an old faithful honey and put some fish in the boat for a friend of ours. 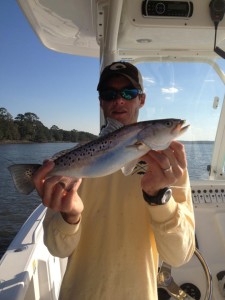 We pulled up and the bite was on! We caught one fish that was only about 15 inches long but it had a 5″ Yellow Tail in it’s stomach. I also broke a hook off on a fish, but 10 minutes later Dad drags one in that still has my hook hanging out of its face! We slimed the new fish box pretty good and called it a day. I have to say that I love my new boat and the luck it has already.