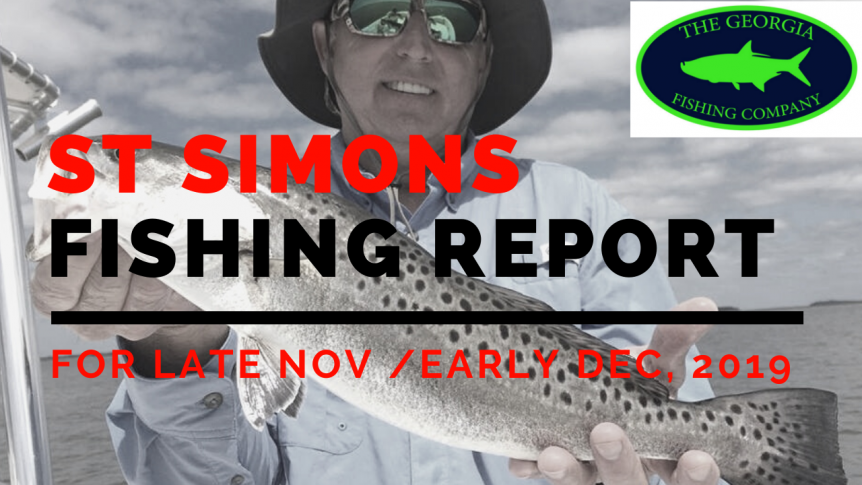 Late November was productive! The trout bite was really good when the tides were in our favor and it’s looking like December is going to be another good one. Check out the report below;

Hey guys, TJ here with the Georgia fishing company. This is your Thanksgiving week fishing report and the forecast for the for next week. Um, this week the inshore fishing started out stellar in spite of the big tide. So we had some nine foot tides. It’d be like an eight and a half foot high tide and like a negative half a foot low. So about a nine foot net tide. And in spite of that, everybody was catching fish. Um, and if you look at not just the fish I caught, but the fish that other people call it, it was a mixed bag of, uh, trout, red fish, black drum and Sheepshead. Now typically, where are you going to find that kind of mixed bag? Docks, rocks, trees. So we’re looking at steep Bluffs with junk, whether it’s rocks, old pilons docks is some just junk fishing. You want gnarly stuff that you’re going to lose hooks and lose floats if you’re worried about getting hung, if you’re having to pay attention to where you’re drifting, you’re in the right stuff.

Um, I was finding most of my bites in the 15 foot range, so fishing fairly deep. Uh, this is mostly throughout the outgoing tide, so 15 feet deep. And then as the tide got down maybe about 12 feet deep, that was the area I was focusing on. Plenty of guys catching them up shallow on the, on the shells, but that was more on the income and tied. Now as the, the week’s going on today, we struggled. Um, today is Friday to Friday after Thanksgiving. And we had a rough time out there today. We, uh, we went a couple hours without a bite, just picking around on the income and tied. We’d find some clean water, but just not a lot of action. And then finally, we, uh, we said, you know what? I’ve had enough of the trout. Let’s go catch some red fish. And that’s what we did. We call it red fish up to 30 inches.

Um, talking to several other boats that really struggled on the, on the income and tied this morning. However, I think that these outgoing tides are going to be where it’s at. I think if we would’ve left in the, you know, 12 to two o’clock range and fished the last of the, the outgoing, I think it would’ve been a different story. We could have fished some of that outgoing tide stuff, some of that load tied stuff just like what I was describing and done a lot better. So this coming up week, that’s kind of what we’re going to have. I’m looking at the tides right here and let’s see, starting on Monday, we’ve got a 12:00 PM high tide, but see by next Friday the sixth we have a 9:51 AM low tide. So a mid morning low tide. I think that’s beautiful for this time of year you’re going to be able to fish the last two hours of outgoing first thing in the morning, first two hours income and before lunch and do a lot of, so that’s going to be pretty good.

The tides are a man. There’s not going to be much current at all. Uh, for example, on Tuesday high tides, a 5.8 and low tides, a 1.3, so you’re going to have a 4.5, four and a half feet of total tide movement. Not much at all there. So, uh, yeah, so later in the week the tides get a little bit better, more along the lines of five feet of tide movement. Um, plus we’ve got some nasty weather coming the first of the week. Sunday, Monday it’s going to get a little bit gnarly. Uh, so I, I think more towards the end of next week is going to be the time to go. I think the tides are going to be in your favor. I’m going to have those mid to late morning low tides and, uh, a little bit bigger tides. So you’re going to have the current that you really need. Uh, other than that is kind of the same roaming schools, a ball, reds out on the wrecks.

Uh, possibly a Cobia or two around if you’re, if you know where to look. And out at the Gulf stream, they’re catching some, a wahoo and black fin tuna pretty regularly. Uh, one thing I want to show you, especially this, I didn’t think about this. This is going to be a good time to tell you this. When times get a little funky, there’s not a lot of drift for your, uh, for your live baits. Go back to last week’s report and look at the tip and remember what I was saying about downsizing your tackle when the tide’s not moving fast. Downsize your tackle if you’re fishing live bait. But if you want to just cover more water, switch to the jig. And this is one that I’ve had luck with. I always say it’s conveniently named because I break this out the week of Thanksgiving, just like you do your Christmas tree and this color pattern is called Christmas tree.

It’s made by gotcha. You can get them on Amazon. You used to be able to buy him a tackle shack and I think you may be able to get them like at uh, uh, the hardware store downtown. But you don’t find these in a lot of tackle shops. So gotcha. Christmas tree, curly tail, grub, unpainted jig head, plain old lead jig head, one eight ounce. That’s a, that’s a deadly rig right there. So when you’re, uh, dealing with no current and you’re dealing with Clearwater, typically between Thanksgiving and Christmas, this is money right here. You can crush them on this thing. So that’s my tip for this week. Go get some Christmas tree grubs, some unpainted jig heads. One eight ounce and do work. Thanks tight lines.