If you can’t stand the cold, you may want to bundle up, grin and bear it and slip on a pair of Gloves. It’s cold, but the fish are biting within 10 Miles of the Beach during late February and into March and April. And, the best part of the deal? You can make the ride in less than ideal conditions when fishing close to shore on certain bottom structure.

Crabs on the Hook!

Using small fiddler crabs as bait can be a task if you don’t know where to pick them up or purchase them. Lucky for us that day, our local source had plenty of the pinching devils. At a cost of five bucks per hundred, I stocked up and bought 400 crabs. Beats digging all day with a shovel in the mud. However, the extreme cold will send these critters DEEP into the ground, and no one will be able to find them without using a BackHoe!

Even the commercial vendors will have problems and they know all the tricks on the book. The crabs you do have on hand should be cherished and keeping them alive for extended periods is not a big chore. Just keep them out of the cold as much as possible. Mine stay in my office for the short life they have in their new heated condo with a lid. I use a 48-quart cooler with just a thin layer of dirt in the bottom, and give them a light mist of water with a spray bottle twice a day. Feed them grits, keep their new home clean and they’ll live for weeks.

I never go Nearshore charter fishing and wreck fishing in Winter or Spring without taking along a minimum of 200 crabs, especially when the fishing charter anglers on board are not used to this sport. You can be robbed of your bait without a nibble, and most people new to using crabs for bait find it quite frustrating until a FEEL is acquired.

For those fishermen who don’t know how to thread one on the hook, I’ll explain it. Very gently drive the barb of the hook through the bottom of the crab until the point comes through the top of the shell. Then, you’re all set.

After a short 30 – minute run from Golden Isles Marina on St. Simons Island Georgia, we crept up to our structure in 40 ft. and tossed out the wreck marker on the down current side of the structure. As I made passes to determine which marking looked best, I noticed TONS of fish on the East End of the structure consistently. So, we anchored directly over it.

There wasn’t a rig tied on or a leader made, so we spent 15 minutes of quality fishing time making rigs. When fishing shallow water wrecks with light tackle, I prefer a certain rig. I like a 3 oz. Weight on the main line, a swivel and 2-ft. of 20-pound leader with a 1/0 short shank live bait hook. This is the easiest rig to make on a charter fishing trip and it works perfectly for Sheepshead.

As the last rig was tied, I looked once again at the marking on the bottom machine to be sure we were still on the mark to prevent an unproductive drop. I liked what I saw, so, “Drop ‘em, Boys” I said.

It was only seconds passed when everyone in the fishing charter party was hooked up with good fish. I breathed a sigh of relief, looked up at that Full Moon in the sky, and said thank you! We had prepared too much for this trip for ANYTHING to go wrong, including the fish NOT biting… We give all the credit to the good lord above, I can assure you.

The first three fish into our charter boat were impressive. Two nice TriggerFish and a nice Sheepshead, or “convict fish” as we call them. Believe me, they wear their stripes well, as they are notorious bait thieves. 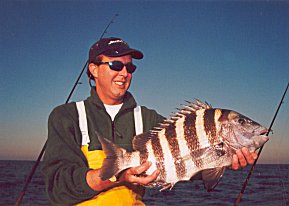 Each drop produced more nice fish. It was a premier day on the water nearshore georgia once again. Our final tally went something like this. After 90 Sheepshead were caught and released, I lost count of them. We were on the fish another hour after that, so I would guess around 40 more. We ended up fairing well on the TriggerFish, too. A total of 12 Triggers caught and released were more than ample for the crew and myself. Triggerfish are always fun to catch with light tackle. One thing many charter fishing anglers don’t know… Trigger fish, although hard to clean, are very good to eat. 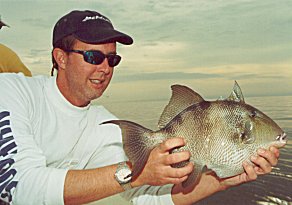 A few of the Sheepshead were QUALITY size fish on this charter fishing trip. We had to get the net out on several occasions due to the size of some of them. These guys fight extremely dirty and they don’t give up. In fact, a large fish fooled me that afternoon. I had hooked the fish, and figured he was a decent fish, but not too big. As I tossed my cigar into the trash bucket, I held the rod in one hand for a split second. Huge mistake! Oddly, at that exact moment, the BIG Sheepshead bulldogged back toward the bottom pulling the rod from my hand. As I fell to my knees, video tape captured the rod bouncing off the gunwale cap, into the air and… SAVED by my right hand as it headed over the side! I have never seen a Sheepie jacked up like that. The fish was a respectable 8 Pounder, but initially pulled like a 2 pounder. The point being, never under estimate a Sheepshead. Pound for pound, they just may be one of the hardest pulling fish on the bottom.

We ended up keeping 5 fish for the grill, and released the other 100+ fish to fight again. No need to keep that many fish. Don’t forget there are new Georgia Fishing State Laws on Sheepshead. The fish must be 10 inches, and you can only posses 15 per person. Take a look regularly at your georgia fishing state laws on bottom fish before you head out.

The DNR of Georgia has received some Federal Funding, and they will be checking boats at offshore areas and boats coming in form an offshore direction. You will be boarded, and your fish will be measured, counted and all information will be logged on a form and kept on file for Fish Management purposes.

My charter fishing wreck marker is somewhat “unique”. You ought to see this thing! Over 100 ft. of ¼ inch rope tied to a pair of 5 – pound Olympic dumbbells for weight. For a marker float, I use an average size boat fender. Most people wonder why we use such a bulky set up. Well, I will sum it up right here, so read on and learn why…

The weight does not concern me a whole lot as far as what it is constructed of. In fact, I used old rusted iron pieces forever, but I have been cultured since! So, now I use a weight WITHOUT corners after losing my marker weight MANY times. The dumbbells rarely get snagged in the structure due to the fact they are ROUND. Most times, I will try to get my marker set up just off the structure so the weight rests in the sand to avoid a snag. But, when I mark up a good reading on the bottom machine, the weight is going down right then and there, regardless of structure.

The reason behind the ¼ inch rope is simple. It won’t hurt those cold hands as bad as crab line or other small diameter rope when the time comes to reposition or head to the barn. The float is key. An oblong bulky object, like a boat fender, will aid tremendously in anchoring your boat properly over the designated area. Once the marker is out, I come back to it and beam up beside it. Watching the compass, I remember the heading that the FENDER and ME are facing. Find the best marking and run that compass heading off the marking just enough to allow the scope needed to hang anchor. Now, you’re set!

May your coolers be full and your rods stay bent!