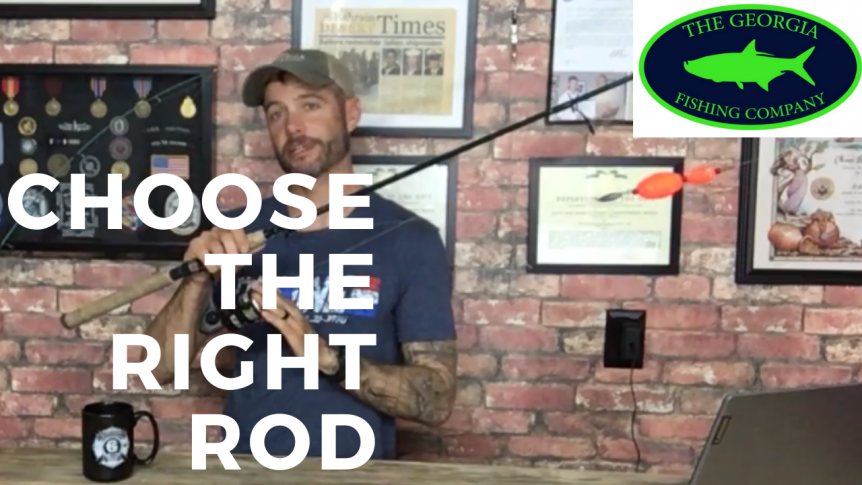 In this video we’re talking about what you should look for in a rod, specifically when fishing with a cork.

“Hey, captain TJ here with the Georgia fishing company. And this week as far as fishing reports go, it’s the middle of December, more or less. And a report’s just not going to change that much. When the water’s clean and moving, you’re going to catch fish and when it’s slow or dirty, you’re going to struggle. So there’s not a lot to say about that. So what I want to do is talk to you about picking out your rod and reel for fishing with the float. I want to say trout fishing, but we fish with floats for red fish, flounder, Sheepshead, trout, black drum, a whole assortment of fish. So if you’re going to be fishing with a popping cork or a slip float, a bobber if you have to call it a bobber, then these are some things I want you to consider. Um, the first thing that I want you to consider is the size of the reel.

I see guys fishing with some smaller stuff like this. This is a stradic, a CI4 2,500. Um, I spool these up with 10 pound tests. These are for casting plugs. I use a a seven foot rod with these. And like I said, smaller reel, the trouble is you’re not picking up a bunch of line. You can only pick up the diameter of the spool per turn of the reel. Uh, so obviously the smaller the diameter, the slower it’s going to be to pick up the line. Um, so that’s probably not going to be an ideal re real size. So usually what I’m going to do is I’m going to bump up to a 3,500, a 4,000 series. This is a quantum Boca 40, and this is even a little bit smaller than what I use. Sometimes. What you’re going to notice with this is when you’re casting, every time a loop comes off the reel, you get more line off the reel.

Whereas with that smaller 2,500, that corks got a pull a lot more turns off the reel. So more friction equals less distance. Uh, in this, in this case, in my opinion, uh, the corks heavy enough, it’s gonna have no trouble getting line off the spool. Um, but then you can also put more line on it. And I’m going to bump up to like 30 pound test rather than 10 pound test. Reason being 30 pound test floats a little bit better. You’re going to see it a little bit better. Uh, so it’s a little bit more manageable. The other thing is, like I said, this is a seven foot rod. This one’s seven and a half. I’ve even used eight, eight and a half and nine foot rods. I think seven and a half to eight is kind of the sweet zone. And I want to show you why, and I’ve got this set up here.

Let me put this rod away. So the reason you want that longer, rod, you’re constantly popping cork and trying to mend your line and taking Slack out and then the court goes down. You got this big bag in your line. So this is where everything comes together. That’s when you want that big spore to help pick that line up. So you’re starting to pick line up and when you go to set the hook, you want that longer rod, because here’s what’s going to happen. These are two different links. Here’s a pencil, right? And then here’s a rod out of a gun cleaning kit because America, look at the height difference between those two, so less than six inches, so less than the the difference in those two rods. So I’m going to lay these two guys down together, side by side, stretched out. The green float is attached to the pencil, which is shorter.

The pink is attached to the metal rod, which is longer. And I’m just going to stop this right here and I’m going to pick it up to where it’s pointed straight up. So it moved the float, that farm, just going to lay that down for reference. And now I’m going to do the same thing with this. The longer rod, I’m going to pick that up until it’s pointed at the ceiling and lay it down. And that’s how much line I was able to move just in that short distance. Now imagine that over an arc of a hook set. So from here to there, you’re six inches out. Further a foot out further away from your hand. As you bring that arc as much as 180 or even more degrees from where you start, that’s going to move maybe three, four, five feet of line difference. And when you’re trying to take that belly out of the line, that could be the difference and missing a fish or hooking a fish, um, it makes it a lot easier to mend your line as it’s drifted and say right in the left and you’re picking your line up and laying it up current and mending it and trying to keep your drift just perfect and maintaining that perfect distance off the bank.

That’s going to make the difference. Trying to do it with a shorter rod, you’re going to work yourself to death, especially since you’re usually going to pair a shorter rod with a smaller reel. Then you compound that even more by putting smaller diameter line on there so that you can fit enough line on the spool and now you’ve got a much bigger problem. Your rod’s too short. Your spool is too small and your, your line’s too thin, so it doesn’t float very well. So, uh, that’s a little bit messy, but the overall concept is still there and it’s still valid. Uh, this longer rod, it’s gonna make a big difference in how you can manipulate your cork, set the hook, you’re gonna catch more fish for that reason. The bigger spool, bigger line. That’s the tip. Thanks. Tight lines.”

Don’t forget to get the kids out on the water, k