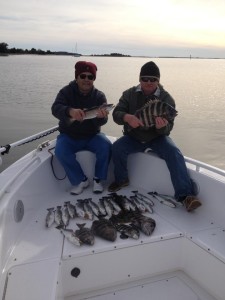 Yesterday morning I was freezing my butt off when I left St. Simons Island and headed out to pick up my customers that were staying on Jekyll Island. I had a perfect plan, and 6 rods rigged and ready to execute that plan.

My intentions were to run up the river to a spot that I knew had produced 50 or so fish the day before and spend half of our day there. Then we were going to run back out to the intracoastal and fish out the rest of our day on the incoming tide in a few trusty spots.

When we got to the first spot, which was a dock that sits in roughly 20 feet of water, the corks immediately started going down. Jerry, the father in the father / son duo, was doing all the work while Mike would only get a bite here and there. I adjusted Mike’s cork to match his father’s and he began to get bites as frequently as Jerry.

This lasted all of 10 minutes. The outgoing tide stopped long before I expected it to and the corks were sitting still with no current. I knew the fish had to still be close by but were likely scattered out with no current to gather them up. I did what I normally do when this happens and started chunking the grubs… nothing.

I decided that the best thing to do would be to make the long ride to our second area while the tide was slack in hopes that it would be moving again by the time we arrived. It wasn’t.

We managed to pick off a few more Trout but the water stayed dead for 2 hours. I knew that their patience was wearing thin and I had to do something to get more bites in spite of the slack water. I told them that we would make the 15 minute run to my “bail out” hole. I try not to go to this area if I can help it, because it’s a small spot that is sensitive to pressure. I also call it the “in case of fire, break the glass hole”.

When we got there I got Jerry and Mike rigged up for some Sheepshead fishing. They immediately started getting a few ranging in size from less than a pound to 7 pounds. We caught plenty of Black Drum and as the tide FINALLY started to rise we started picking up some nice Trout. 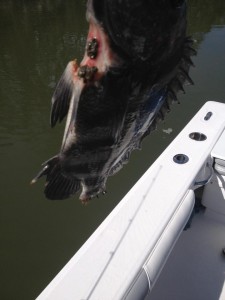 One poor Sheepshead that we caught had been attacked by something, possibly a porpoise or a gator. Its tail was missing with its bones sticking out and a big chunk was missing near it’s throat. We released this poor guy not just because he looked too nasty to eat, but also because he had been through enough.

We eased around and caught quite a few more Trout up to 20 inches on live shrimp and DOA shrimp. On one of the last casts Mike brought a small keeper Flounder to the boat. This was the first Flounder caught with me in 2013 and I was a bit surprised to see one this early in the season. 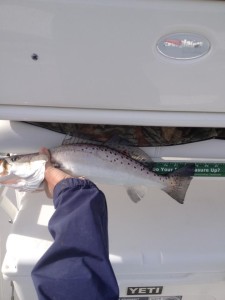 What started with a perfect plan wound up being a day full of shooting from the hip and cutting off all of those rigs that I planned to use and tying on new ones to execute our ever evolving plan. The day was saved but it served as a reminder that more often than not, instincts trump well laid plans.