Today I called a good buddy to try and line up a last minute trip for some Sheepshead and Redfish. My father was planning to go out as well so we decided to just jump in one boat and all go together.

When we got to the first spot I could feel the crumbling of my plans. The unusually low tides and recent high winds had the water stirred up pretty bad. We fished for about ten minutes without much hope of a bite before deciding to move on.

Every good fisherman has one of those spots that he will fall back on when times get hard. I had one of those very close by so we went straight there. When we got to it, I had that sinking feeling again. The current was running very hard, and the water was murky.

We decided to give it a shot anyway, and after about two casts I pulled out a fine 10 pound Sheepshead. Jamie and Dad began to get the hang of it and pulled out several more. One lonely Redfish showed up while we were there as well. 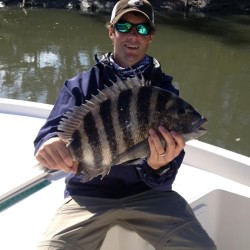 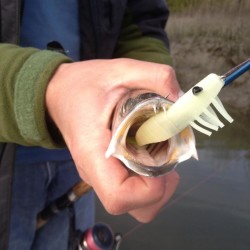 A few bends later we finally did find one. He was eating next to a shell bed with his back out of the water. He never knew we were there and Dad and Jamie both fired baits in his direction. What happened next was probably one of the best “eats” I have ever witnessed. This 30 inch Redfish shot past the shells like a bullet and ate Dad’s Christmas Tree screw 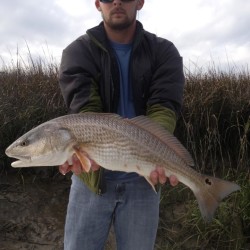 tail grub. After battling around the boat Jamie assisted with the landing and we continued to move in.

The next bend marked the end of the line. There was a shallow gap between two shell beds that we couldn’t pass through. We could see fish moving on the other side and everyone in the boat was going crazy. 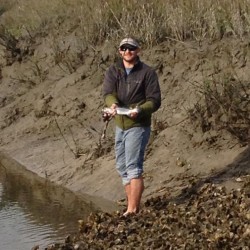 Jamie kicked off his shoes and rolled his pants legs up before piling out of the boat. Being a very salty fellow, he walked across sharp oyster shells with bare feet to get into casting range. Dad followed and went further down the bank.

I watched the two of them pull dozens of Trout out of this hole over the next 45 minutes. I have no idea how many were caught but it was a lot. Jamie even managed to pull one more Redfish out at about 20 inches.

It was an awesome day, but it didn’t start out that way. Just goes to show you that persistence pays off. All fish were released to fight another day.