Today Ray and his dad were on the boat with me for a four hour inshore fishing charter. The water was dirty and the wind was ripping, so we went further than I normally would on a half day trip to get to an area that usually holds some clean water. The long ride would turn out to be worth it in the end.

When we got there the bite started slow, but after digging around for a few minutes we found some shells that were holding some slot Redfish and Trout. The guys went to work on them pretty quickly and were even calling their shots at times! We got all of our keepers at this spot in about 30 minutes as the guys only wanted to keep ten fish. 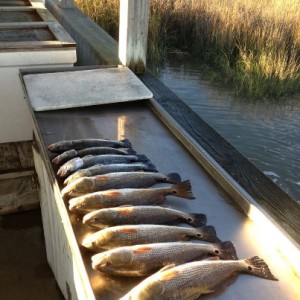 After the bite cooled we worked some banks and picked off a Trout here and there, and the bite all but died at slack tide. But, when the tide turned the Trout bite turned on hard! We caught about 25 more Trout in the last hour and released all of them. We had doubles several times and even had one triple hook up.

When most people were on the dock complaining about the weather, these guys were out there hanging tough and catching some great fish. That just goes to show you that the best time to go is anytime you get the chance.