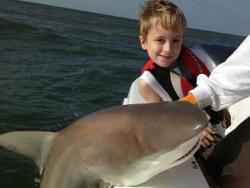 We target these fish with a mixture of live bait and cut bait techniques and we primarily fish for them near trawling shrimp boats. The shrimp boats provide a makeshift “chum bag” that we take advantage of while the sharks pursue the boats hunting the spilled by-catch that is discarded from the decks of the boats.

It is not uncommon to catch more than 10 sharks in the 100 pound range on a four hour trip. This is our most popular trip during the Georgia summer season and I highly recommend it to anyone that is looking to tangle with a huge fish. Shark fishing is catch and release only!

Shark Fishing is NOT a sport of the past when using proper tactics and light tackle. In the modern day of fast center console boats and King Fish Tournaments we are caught up in, one of the best sports that have gone past us on the wayside is Shark fishing.

We have all been there. In the middle of the Greater Jacksonville King Mackerel Tournament, the flat line gets crushed or the DownRigger clip pops and the excitement on board soars in hopes of a Smoker King on the line. Then, the roof caves in. “Man, it’s just a Shark!” This is disappointment at best during times of competition. Aside from the Tournament agony these fish cause, you may want to consider what a ride that shark gave you while you had him on.

As much as some anglers hate to deal with the toothy critters, catch and release Shark Fishing has become a big time sport among recreational fishermen, and when I say fishermen, I am speaking of men, women and children.

“Where are all the Big Sharks?”

The days of killing 14 ft. Tiger Sharks, Bulls and Hammerheads are over for several reasons. Some anglers consider this kind of killing to be inhumane just to have a Jaw full of teeth on the wall. The biggest reason we don’t see a lot of big Sharks being caught today, is many of the larger fish are gone! They are far and few in between and each year their numbers decline due to shark netters and long liners in certain areas.

Shark fins are a hot commodity in Asia. These people pay top dollar for these fins, and due to supply and demand, we really need to take extra care of this fishery before Sharks become a fish of the past.

“On the Bright side of Shark Fishing”

The good news is, the smaller Inshore species (20 – 150 Pounds) are still plentiful in most Coastal areas. Black Tips, Spinners, Lemons, Browns and Black Nose Sharks engulf areas that hole up baitfish or have trawlers working in the area.

As a charter boat guide for Black Tip Shark, I can tell you these fish pull like no other in the Coastal Waters. I would rate the battle right up there with a Tarpon in fight comparison.

Last year, I saw so many Sharks swimming around my boat on several trips; it honestly made me a bit nervous. With younger anglers on the rod and the drag set at an uncomfortable 13 pounds, I had visions of the angler falling over board into the infestation in our chum slick. It’ll get your blood pumping when you see all those 100-pound toothies prowling around your boat. 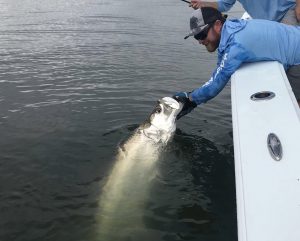 Tarpon fishing is typically lumped in with Shark fishing, but the tactics are quite different. Tarpon season peaks from late July through early September. In Georgia, Tarpon are most commonly targeted around the many sandbars east of the inlets, but can also be found in certain areas of the rivers and sounds. Most Tarpon trips consist of mainly live bait fishing but often the best way to catch them is on artificial lures.

Tarpon grow to be 200 pounds and put on an impressive aerial show once hooked. There is no doubt why they call them Silver Kings after you have successfully fought one to the boat. You will be worn out!

Our shark and tarpon fishing charters are available for 4, 6, and 8 hours and we can accommodate up to 6 people per boat. Please call for pricing and availability.