The hardest thing about doing these podcasts so far is finding new things to talk about when there just isn’t much changing. Maybe the water temperature ticks up a degree or two, or the tides are a bit better, or the fishing was just a little better than the week before. Sometimes I think I just end up repeating myself.

This week, it’s even tougher. The fishing and weather were not cooperative and that just makes this a tough fishing report to deliver, but I guess you have to take the good with the bad. 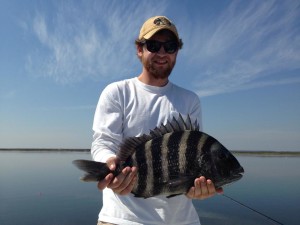 Last weekend we moved around inshore and found some Trout holding in… you guessed it… 8 to 12 feet around structure. We also got on some stud Sheepshead even though some guys in a Carolina Skiff pulled up 20 yards away and no… Payton Manning to Reggie Wayne BOMBED 2, yep, 2 anchors out. One of them might have been a cinder block…

Starting with Sunday we had bad winds and on Monday it was accompanied by some pretty awful rain as I’m sure you remember. Wednesday continued the wind and I opted to reschedule for Thursday to avoid dealing with that. So 4 days in a row with no fishing. Bummer. The worst part about that is it breaks rhythm. After fishing several days in a row you get a much better idea of what is happening. You have your finger on the pulse. 4 days off and you have to come back to new conditions with no information to go off of. That also means I can’t pass as much information on to you.

Thursday’s fishing charter turned out to be a success for the most part. We didn’t set any records, but we ran offshore and caught a lot of fish ranging from Sea Bass, to Snapper, Sheepshead, and Flounder. Not too shabby for the conditions we’ve had lately. There was a slow rolling swell and other than that we had our run of the place.

We also played with some big schools of bonito that were crashing bait on the surface. Between that and some birds we saw on some bait, we can take that as a positive that at least some bait is showing up, even if it’s small.

The fish were smaller, as usual, closer to land and the further we went out the better they got. We stopped at 20 miles and were catching fish as fast as we could get to the bottom and the average size was definitely worth the ride.

So going into this weekend, I recommend 3 options.

Believe me, if I thought you could go beat down some banks with a popping cork and get anything done, you would see me doing it. I just don’t think it is going to be productive right now.

Start looking for the water temp to break 60 degrees. That should mark the turn around in the fishing. Tripletail are just to our south, and once we have some warmer water to offer they should be here.

I’ll be out there grinding it out with you this weekend.

Fun morning with Will and crew today, nice mixed b