For the Tribune and Georgian

Unfortunately this is another report where I am complaining about the freshwater making the fishing difficult. There are some bright notes right now but I am sure that you have noticed that the water color and salinity are way off from normal.

Just the other day I was at the marina when they tested the salinity at the surface. It was 2 parts per million and even though I have no idea what normal is, that just sounded bad. The only way to keep shrimp alive was to take water from the bait tanks at the marina to fill our live wells and re-circulate that water until we found a salty area to run our baitwell pumps. Pulling water from the surface up river was a death sentence to our shrimp. 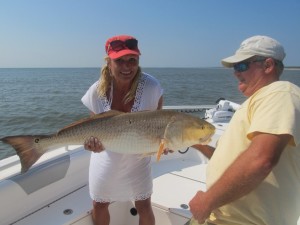 I am hopeful that this will have some sort of benefit once the freshwater is flushed out. If you look at Louisiana and how at certain times of year the freshwater that runs out of the Mississippi pushes several miles offshore, it would be a good comparison of what we are experiencing now. I can only hope that the same benefits they receive will be replicated here.

Recently I made a trip offshore to the SFC reef which is also known as the Sport Fishing Club reef. This reef is about 18 to 20 miles offshore of Jekyll Island. Even that far out I found that the water wasn’t the right color. Visibility was good but the water had a brown color that made me believe that the freshwater had found its way even further out than I thought. The fishing indicated that as well, as there was no bait on the surface and very few fish to be caught other than Barracuda and grunts with the occasional Sea Bass.

On a good note, the inshore fishing is somewhat stable although difficult. Rat Redfish are abundant and that is a welcomed sight after a couple of years of very few juvenile fish. Trout are around but as Trout often do, they are here today and somewhere else tomorrow. Black Drum and Mangrove Snapper are also regular catches right now especially fishing with dead shrimp around structure.

In the last week of August we caught our first Bull Redfish of the season off of Cumberland Beach. This early catch was a nice surprise for our customers and is a sign of the upcoming Fall season. Soon we should have our annual run of mullet on the beach and charter boats will be stocking up on bait for Bull Redfish season. I would recommend catching enough bait to get you through the Fall as soon as the mullet run starts. Carefully package the bait for the freezer because freezer burned mullet isn’t nearly as appealing to the huge Reds as fresh or “fresh looking” baits.

Tarpon fishing continues to be excellent on certain days. The jetties have been covered with the silver kings at times. Many people will complain that the Tarpon are all around the boat but won’t eat. This happens sometimes when the fish are in huge schools of bait and you are fishing with the same type of bait that they are feeding on. There is a time and place to “match the hatch” but this isn’t one of them. Try cutting the tail off of your pogies to make them stand out or use a dead or stunned bait. Soft plastics such as Hogy Eels and Sebile Ondu Spoons can help get you hook ups as well.

I hope that the next report will bring tales of salty water and plenty of fish. Please feel free to email me at info@charterfish.com if you have a fish tale to share or if you have questions that you would like answered in a future report.