For the Tribune and Georgian; 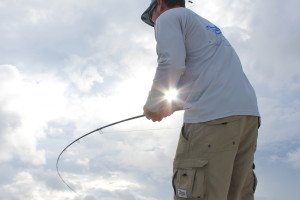 This report isn’t an easy one to write. We have had some of the worst weather this July and it has seriously affected the fishing. When the wind hasn’t blown we’ve had to deal with thunderstorms. If we had a nice day, we still had to deal with all of the fresh water run-off causing the fish to move around.

The good news is that there were a few things that happened to give us hope and this past week has shown promise of improvement. On several days in July the Tarpon fishing was epic. We were never really able to consistently target them for any length of time thanks to the weather, but when we could it was awesome.

A lot of big Jack Crevalle have been showing up in the sounds and near the beaches which makes for some exciting top-water explosions followed by fights lasting as long as 45 minutes. If you can get out early in the morning before the water gets choppy, I suggest having a big top-water plug tied on. If you see these big Jacks tailing you will only need to get the plug in front of them and they’ll take care of the rest.

The Trout bite has been improving over the last several days and the fishing on Cumberland Beach has turned on full force. The water clarity is excellent between Christmas Creek and Stafford Shoals right now and it seems that the Trout have decided to stack up there to avoid the fresh water dumping out of the rivers.

Tripletail are still hanging around but not as well as they were in the last few months. You can definitely still pick up some nice fish by fishing the channel markers around the intracoastal and the main shipping channels but you might have to work a bit harder for them.

Offshore has seen a boost in the Kingfish bite. With our water temperature holding around 80 degrees it has made for some pretty consistent fishing. Earlier in the month Grays Reef was a hot spot but lately fish have been holding on most artificial reefs and live bottom areas. Big Spanish Mackerel have also been around the wrecks as well as the bars around St. Andrews Sound and the Fernandina Jetties.

If you would like to know more about how to rig for and find fish in our area, just visit my website at www.charterfish.com. You can also contact me via my website if there are any questions that you would like for me to address in next month’s fishing report.