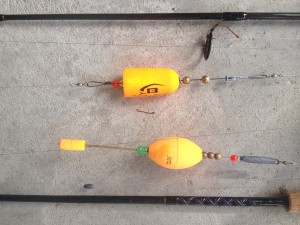 Recently I decided to try adjustable popping corks for a while. I’ve been fishing areas that are quite different from each other and some require me to fish a little deeper than I can with a regular fixed depth popping cork.

I grabbed some adjustable corks and rigged up 6 rods with them, convinced that this would be the answer. I would be able to fish all the spots that I like with one rig.

It worked out OK, except that the adjustable corks tend to get tangled quite often. I used them for several trips and I was pretty happy overall.

However, I was fishing with a customer a couple of days ago and we were catching a few fish here and there but I broke off two adjustable corks after they had become tangled up. I decided it would be simpler just to tie on a Bomber popping cork.

Now it might sounds crazy to attribute all of that to the cork, but it isn’t the first time I have felt that the cork made the difference. I have fished with friends that prefer a different cork but end up tying on one of my Bombers after getting outfished.

What I learned is that it is best to stick with what you know sometimes. I gave the adjustable a fair shot, but don’t expect to see them tied on my line much in the future unless there is some special situation that I am preparing for. I’ll be sticking with the Bombers from here on.