Bottom charter fishing is simply my destiny, whether we target Trout and Red fishing charters Inshore, or Pompano 60 miles Offshore fishing in Georgia at the R4 Navy Tower in 160+ ft. of water. I can’t tolerate a day on the boat without fishing on the bottom.

We all have that tendency to whine a little when someone says, “It’s a 40 mile run, but the fish ought to be there”. Well, let me take all the doubts out of making that long run decision. If bottom fishing is your game, the Red Snapper are biting as good as last year, if not a little better.

The opportunity arose for me to make the long run in comfort to do some bottom fishing. So, I decided to load up on the “Hoss Fly”, a 30-ft. Topaz Captained by Rick Stallard. Once again, I was off to the 40-mile ledges Southeast of the Georgia Coast. My favorite place to fish on our small, but fertile 100 – mile coastline.

A pleasant surprise awaited us in 70 ft. of water on the journey East. From the tower of the “Hoss Fly”, we watched birds swoop and dive at the water from a mile away. When we got close, the answer was clear. The bait marked up in textbook form on the CVS 106 bottom machine. We knew the bait was not going to be a problem after that marking! Goggle Eyes by the thousands swarmed the structure along with sardines the length of an unsharpened pencil.

We heard tale of some very large Boston Mackerel in the area, but our Sabiki’s boasted only Goggles and Sardines. I didn’t see that as a problem. The size of the baits we caught were plenty big enough to get my adrenaline pumping, and after about 60 baits were in the well, we headed east another 20 miles. 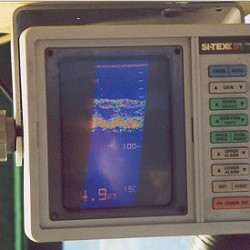 As we approached the holy numbers, we talked of how good the fishing has been, and how good it BETTER be today! We retired our beanbags and started rigging up bottom fishing rigs. Within a few short minutes, we had 6 rigs ready to send down as we idled slowly up to the co-ordintaes I had programmed in the GPS. We were ready to fish. We all stared at the CVS 106 waiting for the bottom to light up on the color screen.

Finally, after several passes, there she was. That beautiful, bright colored marking rising high off the bottom and pointing sharply into the current. I screamed for the crew to “Send ‘em!” I just watched on the first go-round to see the brutal “butt whippin’” get put on some of our crew members who had never caught a Red Snapper. I watched eagerly as the 16 ounce weight peeled line off the Penn 20 Reels as they carried the live Sardines to the bottom.

Finally. Touchdown. The crew quicky slammed the levers on the reels to strike, and I instructed them to make 3 full reels off the bottom to prevent any hang up on the structure. It was about 5 seconds, and the screaming and feet shuffling began! There’s nothing quite like hearing the screams of a happy Angler hooked up with a BIG fish and the Captain on the Radio in the background telling his partners “We’re Tripled Up.. Bottom bite”

After a brutal battle with no drag allowed, Sean Parks and Chip Neal boated their first ever Red Snapper. What a feeling that is to see their faces when they have accomplished something they have never done. As I photographed the action, my partner, Matt Amie was still hooked up with a fish LONG after the Camera was put away. He asked me what I thought it could be. I had no answer. I just looked into his eyes and then down at the reel as line poured off about four times our drift speed. 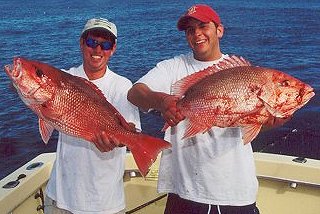 Ten minutes went by, and we finally could see some color. It was a nice Cobia! What a bonus! He made the first boat side appearance and then made a dashing run to the bottom again. Matt finally pulled the fish to the Gaff, but it took all he had left. I have never seen Matt hand off a Rod, but I believe he was ready to. He may kill me for writing that! I swiped him in the head and we threw him in the box. High five’s and Screams engulfed the cockpit as we eased back to the marking. The Cobia had pulled us 200 yards from our initial hook up spot, so the crew had a chance to talk of how great the fish pulled and begged me to get those pictures developed quick! 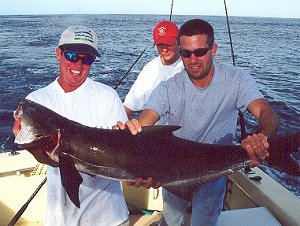 Drift after drift produced fish, until finally, we had our limit of Red Snapper in the box, and the boys were beat down very much bad. We lost several NICE fish that our tackle simply couldn’t handle, and we fish pretty darn heavy, too. They may have been big Amberjack or Gag Grouper, but who knows. Usually, we can turn just about any bottom fish with the rigs we use, but the terminal tackle wouldn’t hold up to the test on a few of those fish. This is a dream trip for a fishing charter group.

Another day well noted for the Georgia 40 mile ledges. There are no secrets to this type of fishing. You simply need the ride to get there, and you’ll catch fish. There are about 30 published numbers on this patch of live bottom that can be picked up at the DNR office in Brunswick. Get your live bait at one of the artificial reefs on the way out, and the rest is just fishin’!

Contact us to book a seep sea fishing charter or charter fishing trip with Captain TJ!

May the seas be calm, and your coolers be full.